Speak With an Expert
Donate
Menu 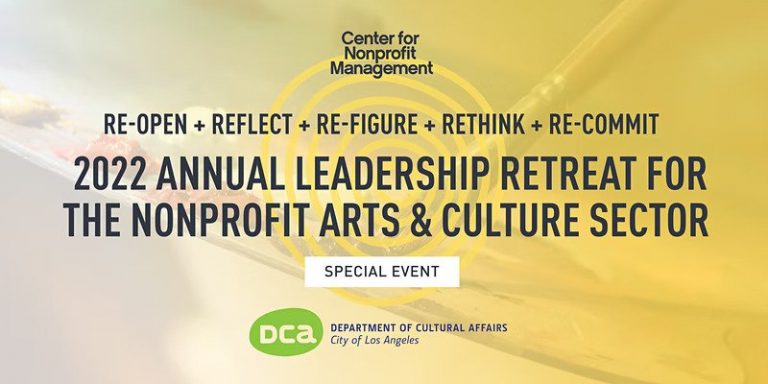 2022 Annual Leadership Retreat for the Nonprofit Arts and Culture Sector

Join us to discuss advancing equity among arts organizations and related topics around recovery, wellness, and embracing change.
Register

These are challenging times for creative communities and arts organizations. As the way we experience the arts has changed, leaders and innovators are developing creative solutions to ensure the arts continue to play a vital role in the fabric of our communities and our region’s economic resiliency.

Join CNM and the City of Los Angeles Department of Cultural Affairs for RE-OPEN + REFLECT + RE-FIGURE + RETHINK + RE-COMMIT – a free virtual special event for the nonprofit arts and culture sector. We’ll discuss renewed community wellness for ourselves and our client communities, revised preparedness for operating during (episodic) crises, and rebalancing our commitments to uplift greater equity. Beyond insights from leaders, attendees will have an opportunity to connect with colleagues and peers in the arts.

Who Should Attend: Nonprofit arts directors, CEOs, board members, and organization leaders

As the Executive Director of California’s statewide arts advocacy organizations since 2018, Julie has worked to increase the legislative clout and visibility of the arts and culture communities by building coalition across the non-profit sectors of California’s creative industries, producing a month-long arts awareness and advocacy campaign every April, and fighting for resources and legislation to serve and protect artists and cultural workers. She serves as the California State Captain to Americans for the Arts’ National Arts Action Summit and on the State Arts Action Network Council and as the co-chair of the Western Arts Advocacy network for WESTAF. She is on the board of California Heritage: Indigenous Research Project, a founding member of the Nevada County Relief Fund advisory council and was elected to the Nevada County school board in November of 2020.

Regina brings to the Southern California Center for Nonprofit Management a wide range of diverse, entrepreneurial experiences and a reputation for leveraging public and private assets to achieve ambitious goals. For more than 25 years, Regina has been collaborating successfully with media, business, philanthropy, government, and nonprofit executives, creating strategic partnerships throughout California to address complex problems. She launched her unique career path at Eyewitness News in Los Angeles before serving as press secretary for California’s Attorney General. Regina built the division of public affairs at Children’s Hospital, ran the New Los Angeles Marketing Partnership with Mayor Riordan and 100 corporate leaders, and was appointed by California’s Governor to lead the Office of Ratepayer Advocates at the California Public Utilities Commission. She was named as a Most Admired CEO by the Los Angeles Business Journal for her role as advisor to hundreds of leaders across the region.

Joel Garcia (Huichol) is an artist, arts administrator, and cultural organizer with more than 20 years of transnational working experience focused on community-centered strategies. His approach is rooted in Indigenous-based forms of non-hierarchical dialoguing and decision-making that uplift non-institutional expertise. Joel uses art and organizing to raise awareness of issues facing underserved communities, inner-city youth, and other targeted populations.

Gustavo was appointed Arts for LA’s Executive Director in December, 2018. Previously, he was Western Regional Director for Young Invincibles (YI), responsible for leading YI’s California offices. Before that role, Gustavo was COO of L.A. Plaza de Cultura y Artes, overseeing day-to-day operation of a county museum, including the oversight of a master plan committee responsible for strategically developing three acres of additional museum campus. He holds an MBA from American Jewish University and a dual BA in Global Studies with an emphasis in socio-politics and economics and Art History from UC Santa Barbara.

An arts executive, attorney, and performing artist, Kristin is Director of the L.A. County Department of Arts and Culture, a local arts agency that advances arts, culture, and creativity throughout the largest county in the U.S. Before being appointed by the County’s Board of Supervisors, she served as Executive Director of the L.A. County Arts Commission. Kristin has appeared on national and international stages including with the dance and social justice company Urban Bush Women and in musicals Rent and Mamma Mia! on Broadway. Previously, she served in key leadership roles at with NYC’s Department of Cultural Affairs. She holds a J.D. from NYU School of Law with honors in Entertainment Law, and a B.A. from Stanford with a specialization in Race and Ethnicity and a secondary major in Feminist Studies. Kristin serves on the board of Grantmakers in the Arts, the national association of public and private arts funders in the U.S.

Dr. Scorza currently serves as the inaugural Executive Director of Racial Equity for Los Angeles County. In this capacity, he is tasked with championing the elimination of structural racism while also promoting efforts to deepen the County’s work on diversity, equity, and inclusion. His life’s work is centered on building leaders who fight for equity in communities and schools. In his previous roles as the Executive Director of Social Justice Learning Institute, a UC Regent, and the President of the Board of Education for the Inglewood Unified School District; he launched programs that helped youth of color become social justice leaders and college graduates. He also helped pass policies that prioritized $160 million for student services across UC campuses and secured $350 million to support school construction for K-12 schools. As a U.S. Navy Iraq-War Veteran and civic leader, he has received numerous awards and accolades, including the UCLA Recent Graduate Achievement Award and recognition by the Empowerment Congress among its 40 Emerging Civic Leaders under 40.

Brenda was appointed Deputy Mayor of Economic Opportunity for the City of Los Angeles by Mayor Garcetti in July, 2016. The mission of the Mayor’s Office of Economic Opportunity is to eliminate and prevent homelessness and poverty, with compassion and inclusion, through education, training, and employment at a livable wage. As Deputy Mayor, she focuses on homelessness, economic and workforce development, reentry, housing and community development, veterans’ affairs, and Federal Promise Zone designation. In June, 2020, she was named as the city’s first Chief Equity Officer overseeing implementation of the Racial Equity in City Government directive. A graduate of Occidental College and Loyola Law School, Brenda served for more than 24 years as president of Community Build, which she helped found in 1992 to revitalize South Los Angeles in response to that year’s civil unrest.

Joe is a senior executive with the City of Los Angeles Department of Cultural Affairs and is also recognized as a cultural studies professor, researcher, and writer. With more than twenty-five years of leadership experience in arts management, cultural philanthropy, higher education, and social services; Joe’s knowledge encompasses arts, creativity, commerce, community, and civic society. He received a degree in art & archaeology (with a dual emphasis on American studies and the world history of photography) from Princeton University and completed his graduate studies in media arts theory & practice at UCLA.

Responsible for the Public Art, Grants Administration, Community Arts, Performing Arts, and Marketing and Development divisions, Daniel manages the DCA’s budget and more than 200 employees providing arts and cultural services, arts facilities management, programming and initiatives. Previously, he served as the department’s Assistant General Manager, supporting the delivery and programming of arts and cultural services. Daniel also served as Deputy Controller for two Los Angeles City Controllers; Legislative Director and Field Deputy for the LA City Council; Budget Analyst for the City Administrative Officer; and Staff Assistant for U.S. Senator Barbara Boxer. He earned a M.A. in Public Policy from Georgetown University with a concentration in Public & Nonprofit Management and a B.A. in Political Science with a minor in Spanish Literature from UC San Diego.

Lynne is LA’s 2021-2022 Poet Laureate. A Los Angeles native and daughter of Caribbean immigrants, her poetry collections include Beg No Pardon (2007), winner of the Perugia Press Prize and the Great Lakes Colleges Association’s New Writers Award; Start With A Small Guitar (2013), and Fretwork (2019), winner of the Marsh Hawk Press Poetry Prize. Thompson’s honors include the Tucson Festival of Books Literary Award (poetry) and the Stephen Dunn Prize for Poetry as well as fellowships from the City of LA, Vermont Studio Center, and the Summer Literary Series in Kenya. A lawyer by training, Thompson sits on the boards of the Los Angeles Review of Books and Cave Canem and is the Chair of the Board of Trustees at Scripps College, her alma mater. She facilitates private workshops, most recently for Beyond Baroque, Poetry By the Sea Conference, Moorpark College Writers Festival, and Central Coast Writers’ Conference.

A special thanks to the City of Los Angeles Department of Cultural Affairs for making this event possible. 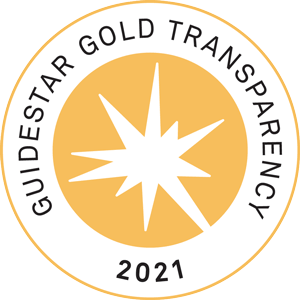 Center for Nonprofit Management (CNM) is a 501(c)3 nonprofit organization. All gifts are tax-deductible to the fullest extent of the law. CNM Tax ID number is 95-3357253.

Speak With an Expert

Need expert advice? We're only an email or phone call away. Use this form to get in touch or call the Nonprofit Answer Hotline at the number listed below. You can also schedule a free, 15-minute appointment and we’ll match you with an in-house expert.

Menu
Speak With An Expert
Donate

Need expert advice? We’re only an email or phone call away. Use this form to get in touch or call the Nonprofit Answer Hotline at the number listed below.

You can also schedule a free, 15-minute appointment and we’ll match you with an in-house expert.